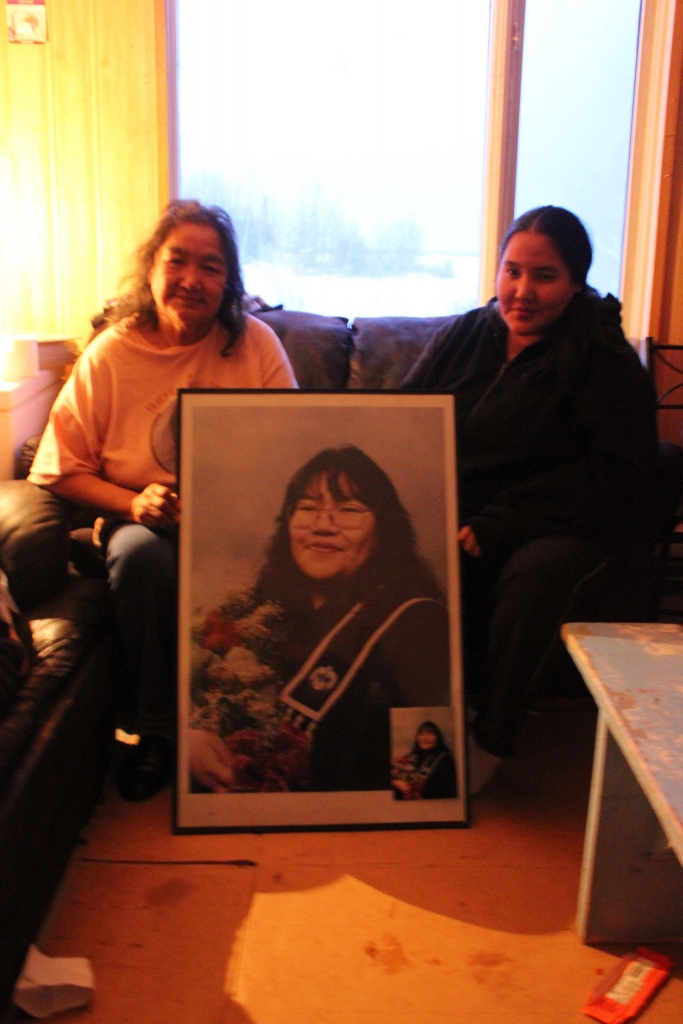 Charlotte Rae of North Spirit Lake First Nation sits in her living room, surrounded by family and community members.
It’s Jan. 18, more than a week after a Keystone Airways flight crashed about one kilometer from the North Spirit Lake airport. Four people died in the crash, including Charlotte’s daughter, Martha Campbell.
On the morning of Jan. 10, Martha was scheduled to fly in to work within the community. She planned to stay a week.
“She phoned me at 6:30 that morning before she left,” Charlotte recalls. “She said…”
Her voice trails off, thinking of the last words her daughter said to her. Her youngest daughter Kassie holds her hand, while Eva, her sister-in-law, rubs her arm. Charlotte whispers to Kassie, and she hands her some tissues.
After wiping her tears and collecting herself, Charlotte continues.
“She said, ‘Mom, I’m coming home.’”
Charlotte had woken up Kassie that morning to tell her that her sister was on the phone.
“She sounded so happy on the phone,” Kassie says of her sister. “She’s never usually that happy when she calls so early in the morning.”
Charlotte went to work as usual that morning at the Victoria Linklater Memorial School. She noted the blizzard and wondered why the plane had to fly in such weather. Around 10 a.m. she recalls hearing the plane circling around the community. Later, she received a call from one of her daughters, informing her of the crash. She was taken home and awaited news of any survivors.
“Then my sister came by and said, she’s gone,” Charlotte recalls.
Martha lived in North Spirit Lake all her life until her family moved to Winnipeg, Man., because her husband was on dialysis, which wasn’t readily available on the reserve.
Charlotte says Martha was a good daughter.
“She helps me a lot, even when she’s in Winnipeg, she would do grocery shopping for me,” she says. “When I say something to her, she never talks back. She’s a good student.”
Charlotte says her fondest memories are of taking Martha camping and fishing in the summertime when she was a child.
Kassie says Martha took her in when she needed a place to live.
“We were that close,” she says. “She helped me a lot, with anything and everything.”
Charlotte is asked what hobbies or passions Martha had, and she pauses for a moment to think. Kassie chimes in.
“Bingo,” she says, and the room erupts in laughter.
“She likes to go to the bingo,” Charlotte recalls with a laugh. “And she would call me on the phone and say, ‘Mom, can you send me bingo money?’”
After moving to Winnipeg, Martha would make frequent trips to the community, working in various capacities.
North Spirit Lake Chief Rita Thompson called Martha a tireless worker.
“She did a lot of things. We called her a floater because she worked in almost every department in the band office,” Thompson says.
A week after the crash, still devastated by the loss, Charlotte has come to terms with her daughter’s fate.
“I thought, well, it’s time for her to go,” she says. “I was thinking, before we’re even born, God has made a plan for us, how we’re gonna die, how long we’re gonna be living. Our days are numbered.”
Charlotte previously lost her husband, but she was prepared for it because he had an illness.
“It hurts, and everybody knows that, everybody has the same feeling if they lost family, especially when it’s sudden,” she says.
Charlotte doesn’t blame anyone for the crash and the loss of her daughter.
“The thing that hurts me is that I’m a mother, and I have a motherly love for her,” she says. “But I know the Lord had a plan for her.”
The family and community held funeral services for Martha on Jan. 27.