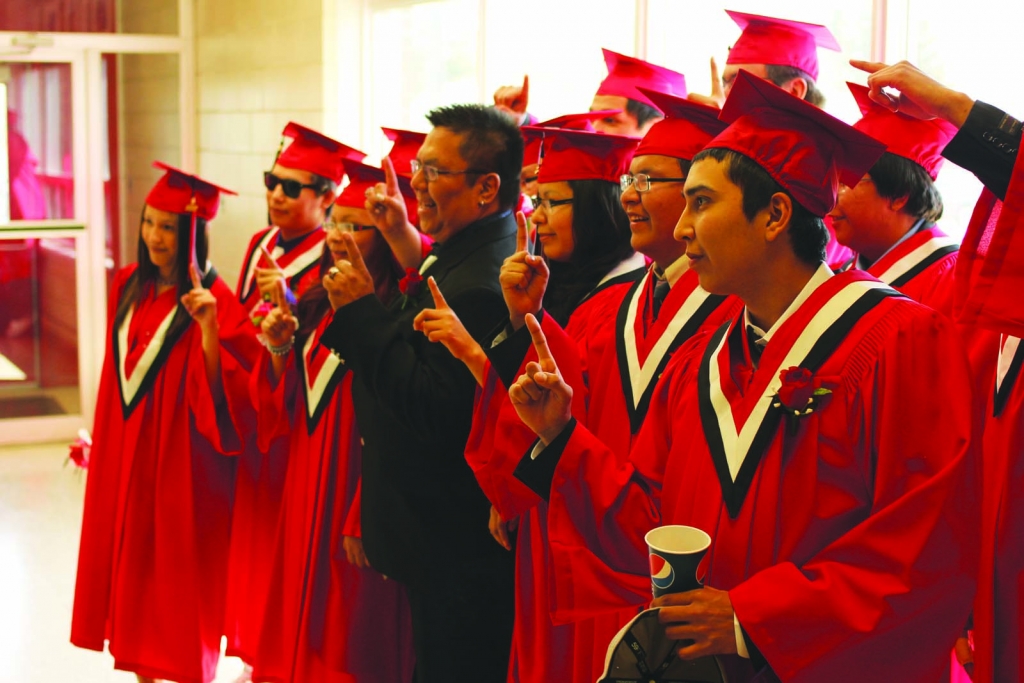 It was a day of celebrating the overcoming of adversity when 15 Dennis Franklin Cromarty High School students graduated on May 16.
Janice Kakegamic of Sandy Lake First Nation moved to Thunder Bay to attend DFC when she was in Grade 10.
“Being away from my family was challenging,” the 20-year-old said. “It was weird being in a new environment.” Janice said she also had to endure peer pressure to drink alcohol, but she did not succumb to it. Now she has a high school diploma with plans to attend Confederation College in the fall.
Nineteen-year-old Duane Matthews of Kasabonika Lake First Nation also faced personal challenges when he began attending DFC three years ago. He said he had to adapt to the big city and learn how to get around, but there were also residents in Thunder Bay who made him feel unwelcome.
“There were some people who said stuff, like when I was walking by,” the 19-year-old said. But he said the encouragement of family and friends helped him push forward. With his diploma in hand, Duane plans on taking electrical engineering at Confederation College and Lakehead University.
Class valedictorian Claudia Linklater of Sandy Lake First Nation had to overcome her own challenges to get where she ended up.
“Many times, I was told I would not make it, that I would be burnout, but here I am,” she said during her valedictorian speech.
Claudia faced an even greater personal challenge when her mother passed away less than two months before the graduation ceremony.
“March 24 was the hardest day in my life in my 21 years of living,” she said. “I lost my mother and I nearly gave up.”
But remembering some inspirational words in Oji-Cree from her mother and support from her friends, Claudia was able to continue her studies.
“If it wasn’t for her voice, I wouldn’t be here,” she said. “If it wasn’t for my friends, I would not even be standing here. I would be shattered to a million pieces.”
Claudia also credited the principal and staff for their never-ending encouragement and support during the graduates’ time at DFC.
To the amusement of the audience, Claudia quoted Sylvester Stallone as the famous underdog Rocky Balboa in the Rocky film series.
“It will beat you to your knees and keep you there permanently if you let it. You, me or nobody is going to hit you as hard as life but it ain’t about how hard to hit. It is about how hard you can get hit and keep moving forward.”
The 15 students were the 12th class to graduate from DFC, and principal Jon Kakegamic said he is amazed every year of the obstacles the students are able to overcome.
“There’s so many times that they want to quit,” he said. “But with support and talk with their parents, they made it through every difficult time to get here.”
Just before the graduates took the stage, Kakegamic assembled them in a room for one final speech.
“Some of you really struggled to be here,” he told them. “When you’re done today, there’s going to be more struggles. You need to remind yourselves that you can do it. We are very proud of you.”
He noted the students who had personal losses in the past month, but were able to overcome it to graduate. “You could say that your mom and your dad are looking down on you today – with a smile,” he said.
He concluded: “So be proud, be strong – and be brown, because that is what DFC is about.”