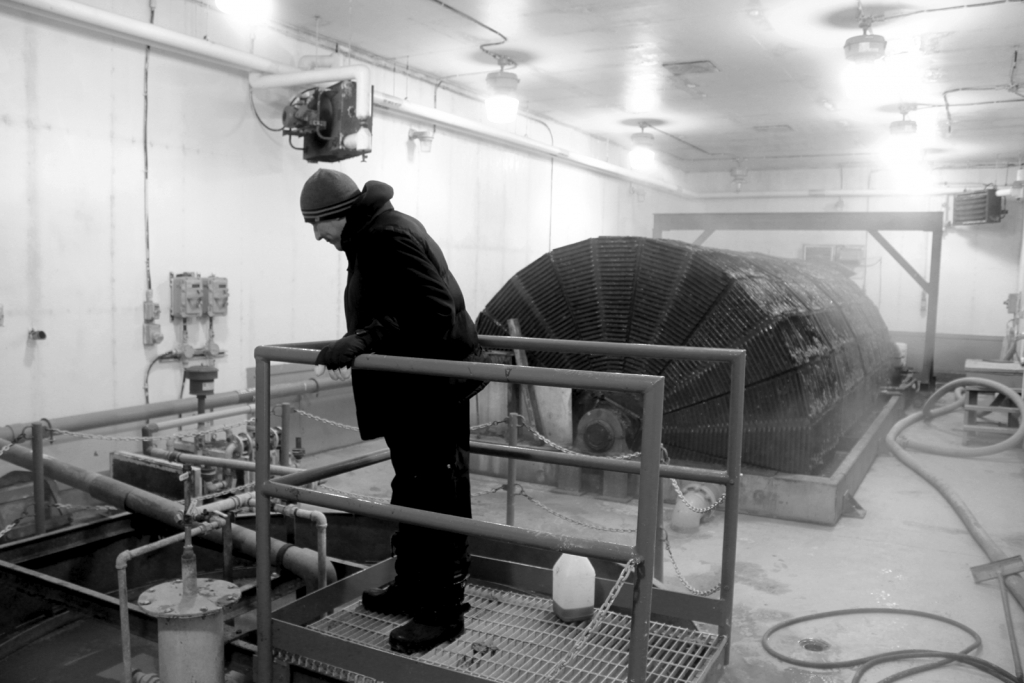 The health and safety of Kasabonika Lake First Nation’s 940 residents are constantly a concern because of an overflowing sewage treatment plant and a diesel generator that’s been at capacity for years.
Kasabonika’s sewage treatment plant has been polluting Kasabonika Lake with sewage for more than 10 years on one side of the community’s island home, while drinking water is brought in to serve the community’s needs from the other side of the island.
Abraham Wabasse oversees Kasabonika’s treatment plant, where he says the sewage from the houses should be cleaned and drinkable by the time it reaches the lake, but it’s not.
“There’s too much wastewater coming through the community, and (the sewage treatment plant) is too small to take care of it,” he said.
The design capacity of the plant is 170,000 liters a day, but the demand is 306,000 liters a day as of 2004.
At times, the sewage plant becomes so overwhelmed that the raw sewage leaks out the door and drains into the nearby lake, which occurred as recently as October 2011.
Because the sewage treatment plant is always at capacity, the First Nation has not connected new houses to the water systems.
“Otherwise, we’d be flooding,” Wabasse said.
Desperate measures
The excess sewage from the plant and sewage from the homes not connected to the water pipelines has to be trucked off the island to a lagoon the band constructed on Crown land.
The community applied for a permit to use the land as a lagoon, then went ahead illegally and built the lagoon without approval.
“We don’t have time to wait, we just go ahead and do it, otherwise we’d be killing our own people,” Wabasse said.
Since the sewage treatment plant first began flooding in 1999, the cleanliness of the water has been a constant concern, said Mitchell Diabo, community projects manager.
“People are wondering about the water quality in Kasabonika Lake, which surrounds this island,” Diabo said.
Diabo said the community has been looking to have research done by a team from the University of Ottawa to determine if the sewage is creating a problem at the water intake, but have not had any success in accessing $50,000 in funding for the first phase of the research project.
“People know not to fish in this lake,” Diabo said.
Generator at capacity
The community’s diesel generation plant is also at capacity in the First Nation.
Since 2007, connection restrictions limited growth in Kasabonika Lake after the 1MW diesel generator reached its peak generating limit of 85 per cent (850 kW), at one point reaching 90 per cent in January 2011.
Even with these restrictions, and with an “aggressive” conservation program in place, Hydro One wrote to INAC in March 2011 that the diesel generation station’s capacity is “stretched beyond what is normal and safe practice.”
Band councilor Gordon Morris said that because of the connection restrictions, there are new homes built since 2008 that are not connected to the power grid. Some of these homes have extension cords running to houses with electricity to meet basic electrical needs such as lights.
Many projects on hold
The First Nation said the hydro restrictions and sewage treatment plant limitations have severely limited all development in the community.
There are nine projects on hold, including houses, a nursing station, a garage/hangar, a new store, a small business centre and a warehouse. The community estimates that these projects could generate more than $9 million in jobs and economic opportunity.
The First Nation lacks the funding to upgrade the sewage treatment plant and diesel generation station. Last year, it spent more than $1 million on the components for a new generator. However, the components sit in shipping containers on the reserve after Aboriginal Affairs cut construction funds.
Until those two components get upgraded, Kasabonika Lake cannot build houses for its fast-growing population, which is already facing overcrowding at an average of more than five people per house and a backlog of more than 50 new units.
Timeline
1992: The sewage treatment plant is commissioned.
1999: The sewage treatment plant overflows for the first time. INAC says it is unable to provide funding for upgrades. KFLN creates trenches off reserve for excess sludge.
2000: More sewage overflow, this time spilling into residential area adjacent to sewage treatment plant and into Kasabonika Lake. KFLN begins trucking over excess sludge to trenches.
2004: Sewage treatment plant is reported to have a demand of 306,000 liters a day where its design capacity is 170,000 liters a day.
Winter/Spring 2007-08: The community’s one-megawatt diesel generation station reaches its peak generating limit of 85 per cent (850kW). Connecting restrictions are imposed, where no new connections can be made, including new houses.
2008: Sewage treatment plant fails completely but is later restored.
January 2011: Diesel generation station reaches 95 per cent (950kW) capacity.
2011: KLFN purchases components for diesel generation station upgrades but cannot proceed with constructing due to funding delays.
October 2011: Sewage treatment plant overflows again. Excess sewage and sludge continue to be trucked off reserve. KFLN submits funding proposal to Aboriginal Affairs for plant upgrades and await response.