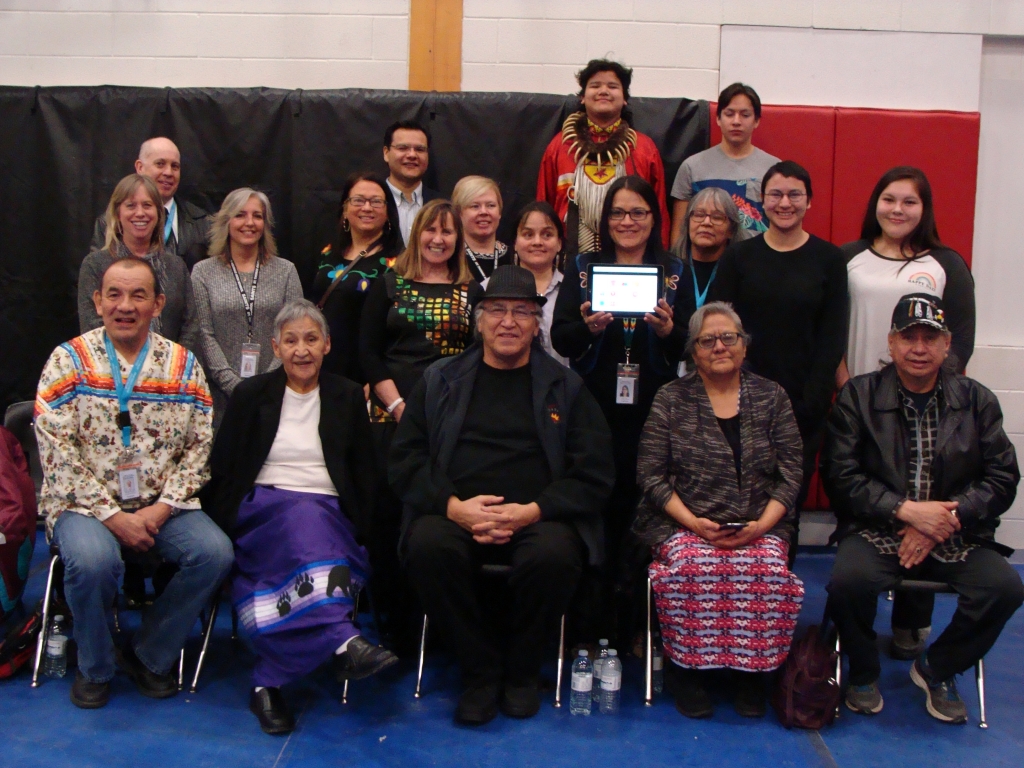 “Using this tool, which our students are looking at all the time — their cellphones, their iPads, their computers — it’s just a part of themselves right now,” says Sheila White, St. Thomas Aquinas High School’s Anishinabemowin teacher. “So they should have no problem looking up anything that is on the App and learning it.”

The App was launched on Feb. 28 at the Winter Powwow at St. Thomas Aquinas High School in Kenora after being developed over the past year with the assistance of five Elders from the Treaty #3 area.

“They gave us the content that would be included in the App,” White says about the Elders. “They saw four categories, starting with the self, then any survival skills and life teachings and then the gifts that the Anishinabe people were given as well.”

White says the web-based App will be available on all platforms, including iOS, Android and Windows. It will also be available for families to use at home to learn Anishinabemowin.

“The first activity I would suggest for people to start with is learning the sound chart, learning all the sounds of the Anishinabemowin language,” White says. “We have been using the double vowel system here for about 10 years. They learn the sound chart from Kindergarten right up until they graduate.”

Grade 9 student Cedar Copenace Redsky enjoyed working on the project. He was involved with the project since the beginning.

“It was pretty fun,” Copenace Redsky says, noting he is semi-fluent in Anishinabemowin. “I learned a lot out of it. Like the prayer, we had to say it in Ojibway.”

Copenace Redsky says it was “pretty cool” to be one of the eight students from St. Thomas Aquinas High School who provided their voices for the App.

“I think it will help (students) a lot with learning how to pronounce it right, saying the prayers, the vowels and the words,” Copenace Redsky says. “It’s never too late to start learning about it.”

Grade 12 student Sydney Flett also helped out with the voice recording for the App.

“It brought out another side to people — I feel like I got to know them a lot better through the process of doing it,” Flett says. “I feel like it built a better school community for the people who were involved.”

Flett says she learned more Anishinabemowin words while participating in the project.

“I know a few basics, like the animals, the numbers and a few of the colours,” Flett says. “I certainly learned more as we were doing the App and as the other students talked to the Elders and I got their feedback from them.”
Phyllis Eikre, KCDSB’s director of education, says the partnership between students, staff, Elders and Ogoki Learning Inc. was a learning experience for everyone involved.

“In an area where the Ojibway language is being forgotten this work explores the preservation of the language in a new and innovative way,” Eikre says. “This new resource will be helpful to support the work of our Ojibway language teachers in the classroom across our school board. We also hope that families will use the app in their own homes to help them learn the Ojibway language as well as the culture and traditions of the Anishinabe people.”

Darrick Baxter, president of Ogoki Learning Inc., says he just assisted the students with the App.

“The students did most of the design and programming,” Baxter says. “The App takes students through Ojibway phrases, words, numbers, colours and day-to-day conversational pieces.”

The App is available for downloading at ojibwayapp.com/niin/.