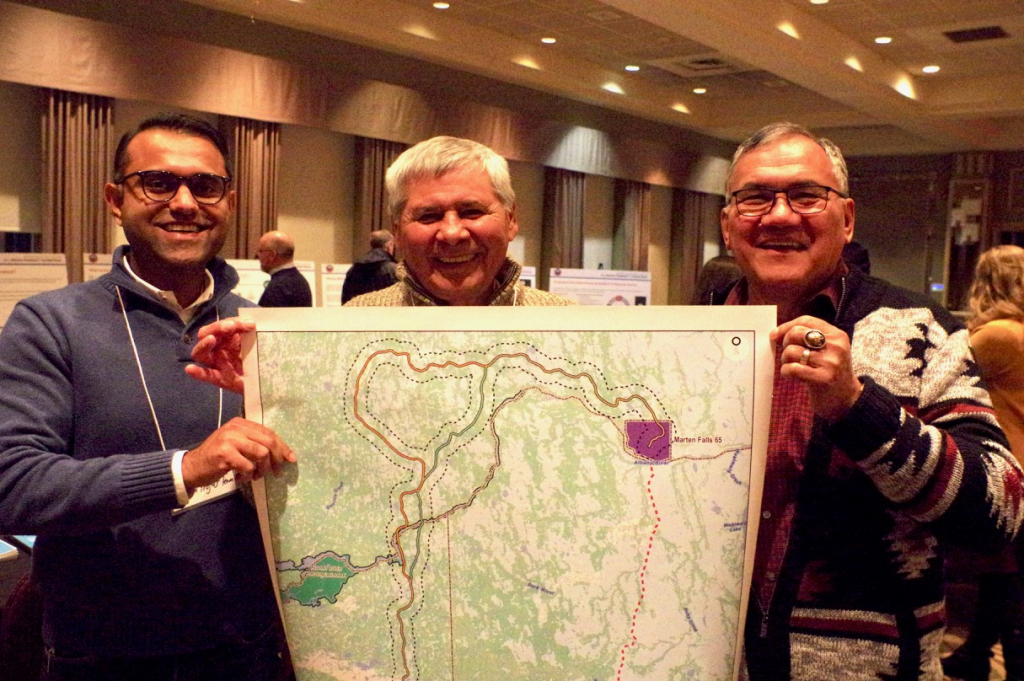 Qasim Saddique, Lawrence Baxter and Bob Baxter hold up a map of some of the possible Marten Falls all-season Community Access Road routes during a Public Information Centre session at the Valhalla Inn in Thunder Bay.

Marten Falls delivered an update on its proposed all-season Community Access Road during a Public Information Centre session at the Valhalla Inn in Thunder Bay.

“Marten Falls has been wanting an all-season road to the community for a long time and they’ve been working on it for a number of years now,” says Bob Baxter, Marten Falls citizen and member of the Community Access Road project team. “We’re just in the environmental assessment stage and consulting stage right now to collect feedback from the public and the communities that will be affected.”

Baxter says there has been mixed feedback from the community about the Community Access Road.

“There’s problems like drug issues that they’re concerned about and the fluctuation of people coming up there to hunt,” Baxter says. “On the positive side the cost of living would be brought down — the prices would somewhat come down so people would be able to purchase a lot more than they are purchasing now.”

Lawrence Baxter, senior community advisor with Marten Falls, says the Community Access Road would be “very beneficial” for the community.

“I think it’s going to be really good — the independence to go in and out whenever you want,” Lawrence says. “The only concern people have is having people coming in from different walks of life.”
Lawrence says one of the benefits from the Community Access Road would be better access to building materials for housing.

“And people can bring whole families out,” Lawrence says.

Qasim Saddique, project manager for the Community Access Road, says the terms of reference draft for the project have been released to the public and to Indigenous communities who are interested in the project.

“This evening we heard a lot of things from people, a lot of initial questions around what the alternatives look like,” Saddique says. “People are interested in knowing how quickly this road will be built, what does this mean to the region. Other people (were interested) in jobs associated with it, economic opportunities this will bring. People were also interested in the impacts the project will have naturally, how it will impact the natural environment, the water, the fish, the animals, (and) how it will impact community citizens socially and economically.”

The www.martenfallsaccessroad.ca website states that better access to the community will reduce transportation costs for goods and services; enhance access to emergency, health and social services; increase opportunity for training and jobs for First Nation people and businesses during planning and construction; and increase opportunity for local sustainable economic development.