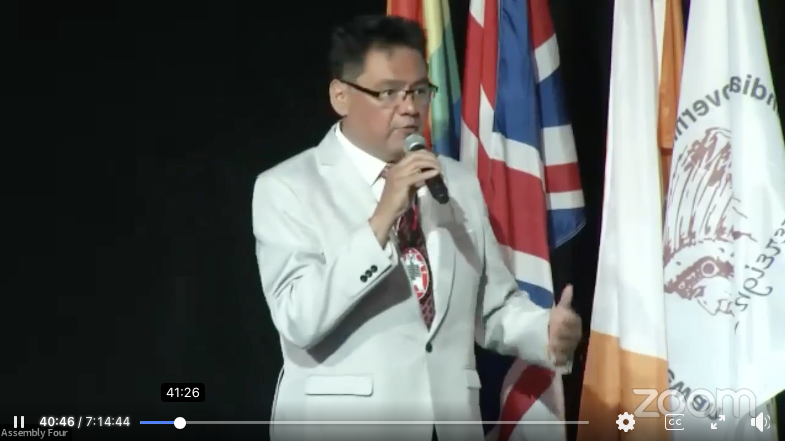 Nishnawbe Aski Nation leaders highlighted the importance of working with leaders from other remote communities on northern remote issues during the initial meeting of the National Assembly of Remote Communities, which was formed in 2021. The May 31-June 2 meeting was co-hosted by Federation of Sovereign Indigenous Nations (FSIN) First Vice Chief David Pratt and Deputy Grand Chief Bobby Narcisse in Saskatoon, Saskatchewan.

“I’m very excited about this endeavour with FSIN and the many other regions that are getting together for the sake of our remote communities,” says Grand Chief Derek Fox via the Zoom virtual platform. “For those who don’t know what it’s like to live in the remote north … they endure the high cost of living, the cost of fuel, delivering any kind of services to say Neskantaga or Bearskin Lake. These are things that are often not taken into account when it comes to announcements of funding and ensuring that First Nations get the resources they need.”

Narcisse says the leaders want to bring more attention to the plight of remote communities and to identify the severe gaps in services that are prevalent amongst children, youth and families.

“Many of our communities within the remote north sit on very rich resource lands,” Narcisse says. “Our children, youth and families should be enjoying a quality of life that is exceeding what they (have) right now.”

Deputy Grand Chief Victor Linklater says it is important to keep speaking up because “our children are precious.”

“We want them educated, we want them strong, we want them powerful, we want them healthy, so we need to work together,” Linklater says. “It’s nice to see a good mixture of Elders, knowledge keepers, youth, leadership, technical people — together we can do great things.”

Mushkegowuk Council Deputy Grand Chief Rebecca Friday says it is important to fight for the children, noting that the current generation of children is facing a loss of their language.

“The grandparents can’t understand their … great great grandchildren — it’s sad to see that because we need to speak in our language,” Friday says. “That’s why I spoke (Mushkegomowin) in my opening remarks. I’m trying my best to speak my language the way I was taught. All of my kids speak (Mushkegomowin), but my grandchildren don’t.”

Theresa Sutherland, member of the NAN Women’s Council and Fort Albany citizen, says she has seen how the lack of mental health resources and services impacts First Nations women and by extension their communities.

“While there are a handful of community-based treatment or land-based detox programs scattered throughout the NAN territory, they are underfunded and under resourced,” Sutherland says. “We need holistically comprehensive addictions treatment programs in every community. Women are the heart of our families, the heart of our communities, they can’t be expected to leave for the extended time needed to detox, then enter treatment and then move into an aftercare plan.”

Ashley Bach, member of the NAN Oshkaatisak Council and Mishkeegogamang citizen, says she didn’t have an opportunity to grow up in her community due to funding inequities in rural and remote communities, noting she was apprehended at birth and adopted by a non-Native family in B.C. when she was five-years-old.

“We feel at this present time there is no possible means of providing the special needs required by this child and there is simply no resources or facilities in our community that would enable this child to receive the best care possible,” Bach says, quoting a letter written by current Mishkeegogamang Chief David Masakeyash, who was a councillor at the time. “In that letter, that’s where they had to sign away saying that a family outside that wasn’t First Nation could adopt me and take care of me because they didn’t have those resources to do it themselves.”

“Canada has failed our youth and families for decades, but I am encouraged that we now have a healing path forward,” Narcisse says. “The launch of the National Assembly of Remote Communities is an important step on our journey of long-term reform that will be First Nations led, as treaty and Indigenous rights holders, and based on our inherent authority to care for our children. I look forward to taking this historic step with our brothers and sisters from many nations.”

“This assembly will address the serious funding issues our northern and remote nations face daily and address those areas where investments are critically needed,” Pratt says. “Our First Nations children are our future, and we need to create a better path forward for them. This is the first step in that process.”