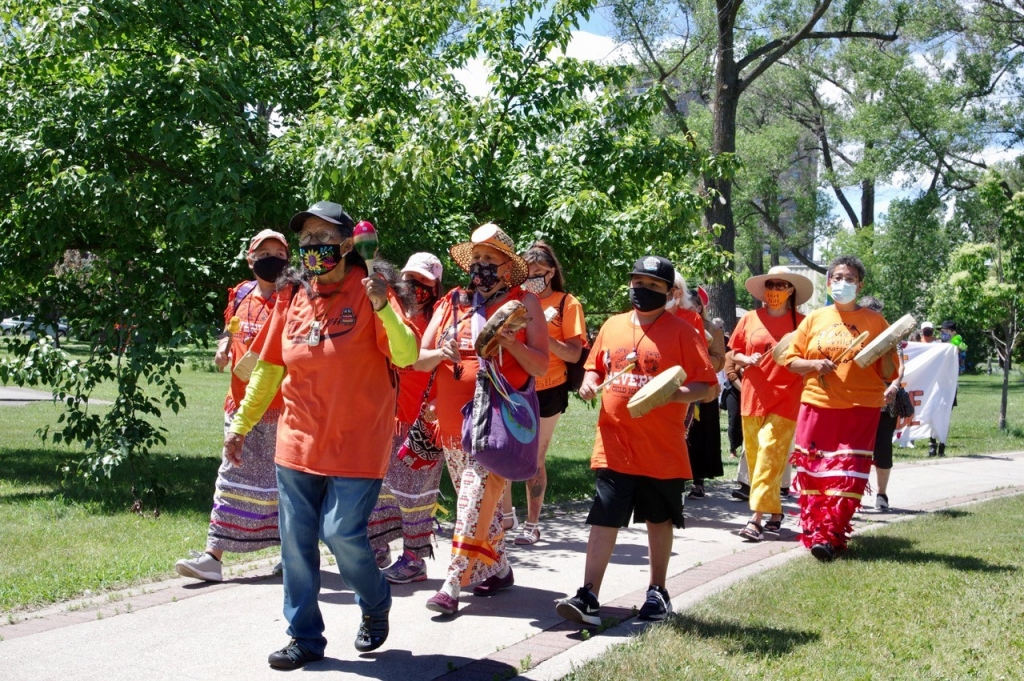 Elder Ma-Nee Chacaby leads the No Pride in Genocide marchers beginning at 2:15 on July 1 from Waverley Park to Thunder Bay’s waterfront to honour the 215 children found at the former Kamloops Indian residential school. Photo by Rick Garrick.

Thunder Bay’s No Pride in Genocide march began at 2:15 on July 1 to honour the 215 children found at the former Kamloops Indian residential school.

“It’s a grieving time for us (with) what they found and what they’re going to continue finding,” says Elder Ma-Nee Chacaby, whose memoir, A Two-Spirit Journey: The Autobiography of a Lesbian Ojibwa-Cree Elder, was published in 2016. “There’s going to be more.”

Chacaby says the turnout was “pretty good” for the walk from Waverley Park to the Thunder Bay waterfront.

“It was a beautiful walk,” Chacaby says. “The line was so beautiful, you saw the orange coming all the way around the corner.”

Chacaby says the signs were created by a group of youth a couple of days before the march.

“I work with a lot of young people and they did the art,” Chacaby says. “We were fixing all this up at the Waverley Park, so a lot of it has to do with these young kids.”
Cynthia Nault, one of the organizers of the march, says it was hard for her to see people celebrating and having picnics and fireworks for Canada Day when so many people are grieving due to the discovery of unmarked graves at former residential schools.

“It’s really important for people to come out and do some listening and some learning and see what’s really going on in their own backyard,” Nault says. “I think Canada as a nation and Canadians have to do some serious work and decide going forward how they want to live with First Nations people. First Nations people have been here longer than Canada and our relationship between peoples used to be a lot better as was shown by the Two Row Wampum Belt, so I’d like to see us getting back to that type of relationship where we live together.”

Lac Seul’s Ann Magiskan wore a special skirt that her partner saw in a vision about a week before the march.

“So I commissioned my daughter Mary Magiskan to make this skirt,” Magiskan says. “There are so many messages in this skirt — every ribbon that is tied on here represents the first grave that was unearthed, 215 children. So I was honoured to be able to tie 215 ribbons while my daughter made the skirt.”

Magiskan says the red colour in the skirt represents the Missing and Murdered Indigenous Women and Girls.

“It also has the water, Nibi, which is so important to life,” Magiskan says. “We are raised in water so it is a very important message to keep that message of caring for water as Anishinabekwe. We’re the keepers of the water, we need to start to honour that and share those messages.”

Magiskan says the strawberries on the skirt represent new life.

“And the last one is the children on the bottom, which represent the children that were taken forcibly,” Magiskan says.