Eabametoong evacuates 513 citizens due to fire 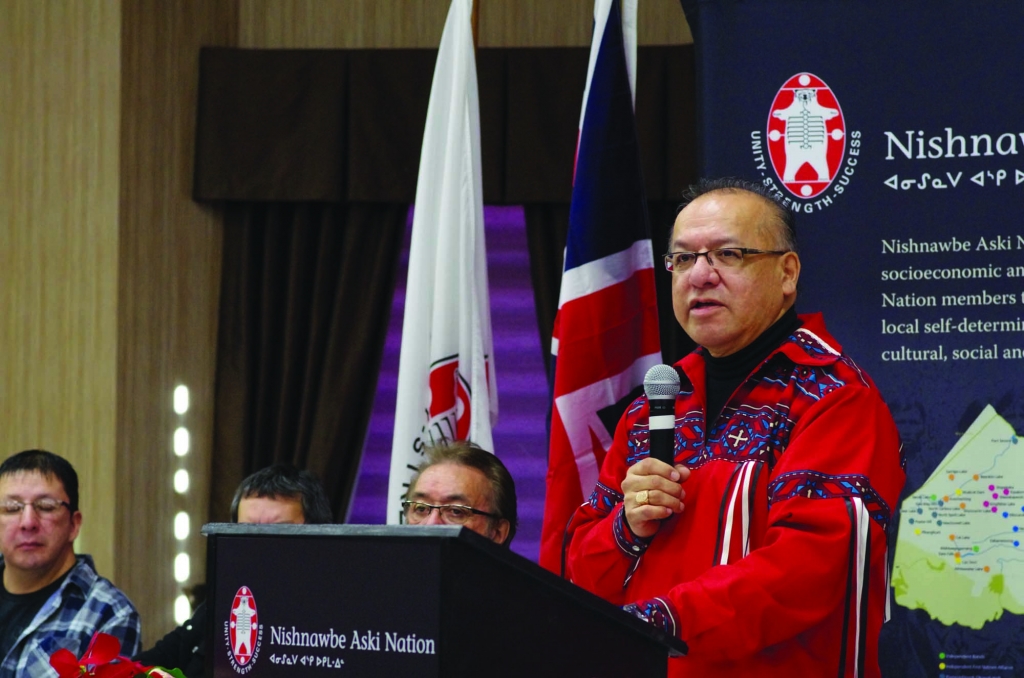 Eabametoong Chief Harvey Yesno, pictured at a Nishnawbe Aski Nation event when he was grand chief, says about 513 Elders, children, medical priority residents and their supports were evacuated as of Aug. 14 due to the Nipigon 45 forest fire, which is located about 35 kilometres southwest of the community. Photo by Rick Garrick.

Eabametoong evacuated about 513 Elders, children, medical priority residents and their supports to Thunder Bay, Timmins and Kapuskasing after declaring a forest fire and smoke emergency on Aug. 11. The Nipigon 45 forest fire is located about 35 kilometres southwest of the Matawa community. The Ministry of Natural Resources and Forestry’s forest fires webpage states the fire was not under control on Aug. 15, but noted there was low fire behaviour and relative high humidity which should keep smoke issues to a minimum.

“They do have nine (FireRanger) crews in there to work on the fire,” says Eabametoong Chief Harvey Yesno on Aug. 15. “It’s just a large fire, it’s about 6,600 hectares. Smoke is not an issue, which is really good. The forecast for weather I think as well is really good, favourable not only for the winds but also for the crews to work on the fire.”

The MNRF previously had nine FireRanger crews at the fire with helicopters bucketing water on hot spots on Aug. 14.

“The fire is still being monitored — it has grown to about 6,000 hectares now,” Yesno says on Aug. 14. “They are doing some measures to try to contain it, there are some suppression measures but also they did some what they call (controlled) ignition of fuel. They kind of do a backwall or firebreak.”

Yesno says the community was concerned that smoke from the fire would affect the health and safety of residents when they decided to declare the forest fire and smoke emergency.

“Eabametoong First Nation like all other remote communities across Ontario continue to face the challenge of making decisions in order to protect the lives and health of our citizens,” Yesno says in the Aug. 11 press release. “The main concern is environmental and health related to the air quality, however the same smoke and ash can also significantly impact any emergency evacuation flights if the situation becomes more dangerous or severe. We are now approaching 24 hours of waiting, and the decision has been made that we require emergency assistance.”

Yesno says the community suffered the loss of one of the evacuees, an Elder who was about 93-years-old, in Thunder Bay.

“She wasn’t feeling well towards the evening and then she passed at the hospital last night,” Yesno says on Aug. 15. “So now we have to not only try to bring the immediate relatives out, but also there’s some family members in Timmins and Kapuskasing so we’re bringing those here (to Thunder Bay).”

Yesno says the community also had a problem with some of the families being split up during the evacuation, noting that 256 residents were evacuated to Thunder Bay, 168 to Timmins and 89 to Kapuskasing as of Aug. 14.

“We’re trying to deal with that, it’s very difficult,” Yesno says about the separated families. “We may have a parent here and the children in Timmins or vice versa.”

Thunder Bay also received about 54 evacuees from Red Lake as of Aug. 12 due to the Red Lake 49 forest fire.

“Thunder Bay is a willing partner in responding to the needs of our neighbours as they face this dire situation,” says Thunder Bay Mayor Bill Mauro in the Aug. 12 press release. “We have, though, advised the province of our limitations due to the strain on our emergency medical services when it comes to hosting vulnerable populations who may require increased medical care, especially as we continue to respond to COVID-19. We are counting on other communities to also step forward to assist during this emergency.”

Norm Gale, city manager with Thunder Bay, says the city had discussions with Dr. Janet DeMille, medical officer of health with the Thunder Bay District Health Unit, regarding the arrival and hosting of additional people within the city during a pandemic.

“COVID-19 prevention measures are in place in Thunder Bay and evacuees will abide by the health and safety measures in our community to keep the evacuees safe, given that they have no active COVID-19 cases in their communities,” Gale says in the Aug. 12 press release. “This again puts extra pressure on our emergency services during these unprecedented times.”

The MNRF’s forest fires webpage states the status of the Red Lake 49 forest fire was changed to being held and 100 per cent contained on Aug. 15. The fire received significant rainfall over the 48 hours up to Aug. 15, including 30 millimetres overnight, which resulted in the fire exhibiting minimal fire behaviour. It was 552 hectares in size on Aug. 14, but the FireRanger crews established a hose line around the entire fire and were working inside the perimeter of the fire on Aug. 15. The fire had 24 FireRanger crews committed to suppression, six sustained action crews and four helicopters continuing to support crews on the fire line on Aug. 15.