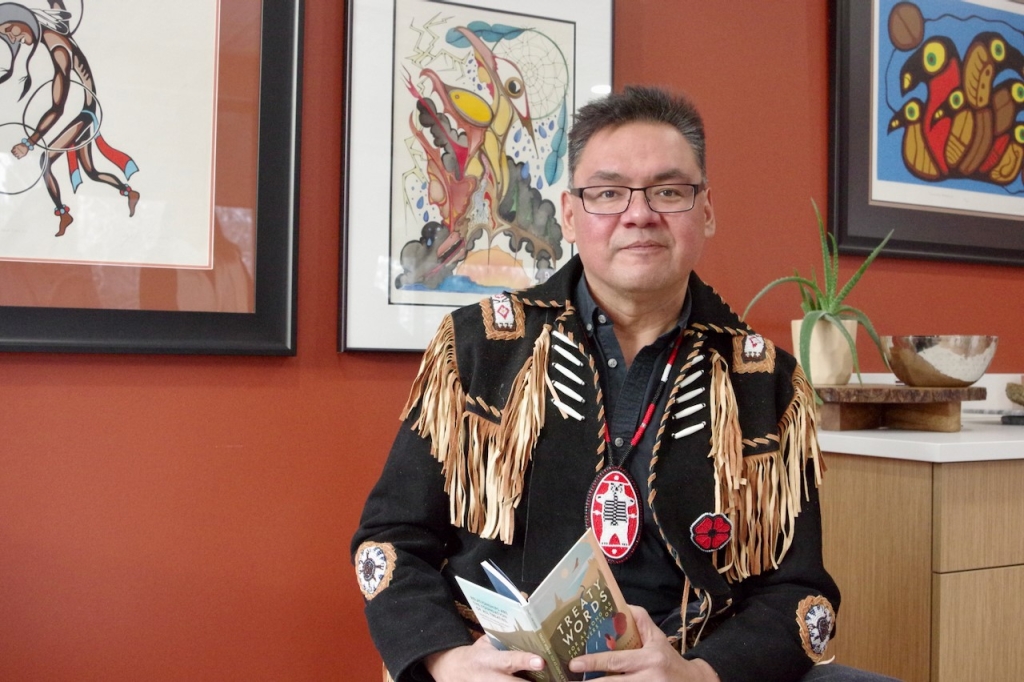 “We all are treaty people, but I’m here to speak to you about the true history of this country and how this country called Canada was formed on a litany of broken legal agreements, broken promises and mistruths and how this has caused two Canadas to exist,” Narcisse says. “One Canada tells itself that it is a model to the outside world when it comes to human rights and a wealth of opportunities granted to all who live within its borders, from universal health care to free public education, access to the job market, the right to vote and chase the dream of home ownership and acquiring various things like an SUV or a boat and motor.”

Narcisse says this is not the Canada that many First Nations people have experienced across Treaty 5 and Treaty 9, which cover the northern two-thirds of Ontario.

“Our ancestors signed those treaties with the Crown, with the government of Canada and even with Ontario,” Narcisse says. “We entered into these treaties with the newcomers, the settlers in absolute and good faith. Back then we’ve heard stories and historical references where we lived on helping each other, assisting the newcomers. They thought this would be the same with us, that they’d create a society where we would all prosper jointly.”
Narcisse says Canada has broken every treaty that it signed with First Nations people.

“As a result our children do not have the same rights, privileges and freedoms as non-Indigenous students,” Narcisse says. “One of my portfolios is child welfare — we are constantly working with our First Nations families and children to get them equitable services at the community level.”

“The Proclamation established protocols for dealing with Indigenous nations and set up a treaty process which required there be consent between two parties, that compensation be provided for any lands or resources secured by the Crown,” Narcisse says.

Narcisse says they often get questions about what treaties are.

“Some people don’t think treaties are real, they don’t think they mean the same as laws but that’s not true,” Narcisse says. “Treaties are a formal agreement between two or more nations, treaties between Indigenous people and the Crown are solemn agreements that set out promises, obligations and benefits for both parties.”

Narcisse says First Nations people entered into treaties with the understanding that both sides would benefit.

“This hasn’t happened yet, there’s inroads going into that but it really hasn’t happened,” Narcisse says. “People in general need to be educated about the true history of this country.”

Narcisse says Treaty 5 and Treaty 9 are among about 70 historic treaties recognized by the Crown.

“Historic treaties combined with policies such as the Indian Act have served to control … and diminish our peoples, move us off the land so others could come and reap the rewards for these lands of plenty that we have,” Narcisse says. “In doing so, these treaties have penned our peoples into tiny tracts of land where our peoples could not prosper as well as non-First Nations people coming from Europe and the British Isles.”

Narcisse says the First Nation ancestors would not have signed the treaties if they knew that would happen.

“The number one goal (of our First Nations) was to protect our families, our children, our land and our ways of life,” Narcisse says. “Our ancestors believed and agreed to share the lands and resources and to live peacefully and coexist together. We never gave rights to the land away.”

Narcisse says the first promise of the treaty was broken from the start, that all those who signed the treaty would physically ratify it once it was written up.

Narcisse adds that widespread public education was promised under the treaty.

“But instead of fully functional proper schools in our communities, a side deal was made with a religious order to establish and run Indian residential schools all throughout our lands and territory,” Narcisse says. “These schools in no way honoured the spirit and intention of the treaties our people signed, quite the opposite.”

Narcisse says First Nations people were also shut out of resource extraction and sharing the wealth of the land and many business developments in the north and their voices have consistently been ignored at negotiating tables.

“This has prevented us from exercising legal rights to be the stewards of the land and making more sustainable development happen in northern Ontario, especially within our treaty areas,” Narcisse says. “There is no way our forefathers would have signed an agreement that allowed this or kept our people shut out of development, leaving us as paupers in our own land, unable to create and live in stable, clean affordable housing within our communities.”