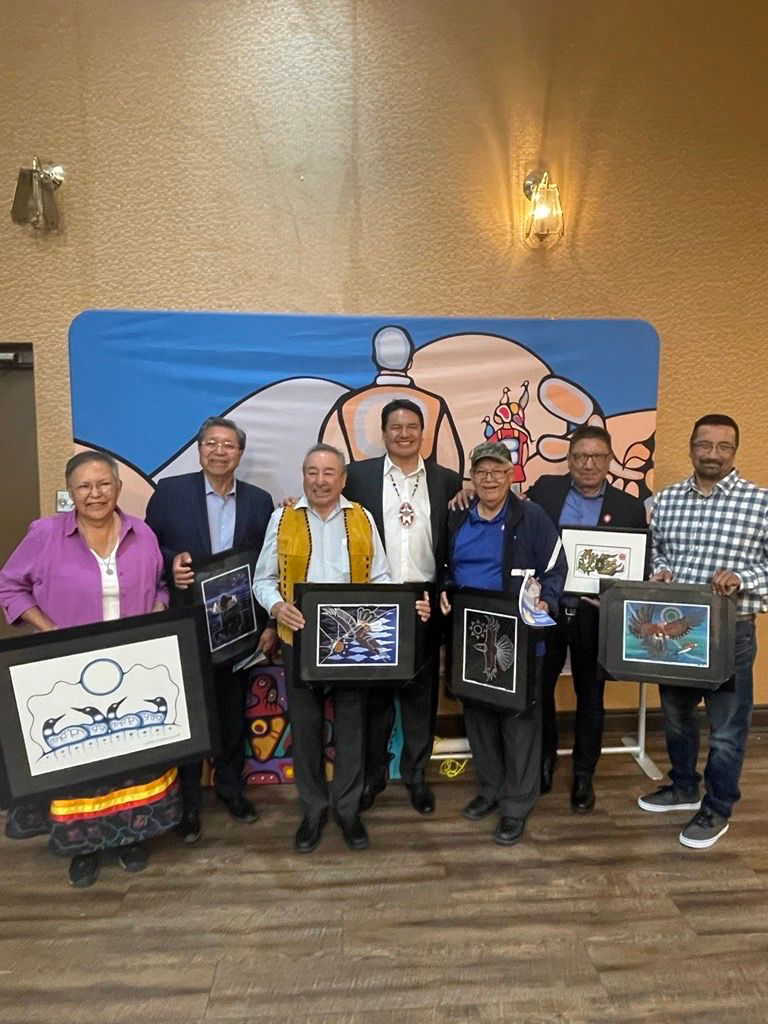 Nishnawbe Aski Nation (NAN) recognized the outstanding contributions of six citizens and two groups during the 2022 Keewaywin Awards ceremony on the second day of the Keewaywin Conference, held Aug. 9-11 in Timmins.

“We are pleased to congratulate this year’s recipients and we are proud to honour our past grand chiefs for their tireless efforts and significant contributions to our nation,” says Grand Chief Derek Fox. “We acknowledge the outstanding accomplishments and commitments they have made to improving the lives of our people and strengthening our communities. It is important that we take time when we gather to recognize the contributions that our leaders and citizens make to our communities and celebrate their success. Their dedication and accomplishments are inspiring.”

The Elder Recognition Award was presented to Delores McKay, Mattagami, who has worked at many places across the country, including currently as the executive director of the Parry Sound Friendship Centre and previously as executive director at the Native Women’s Association, Sheshegwaning First Nation and Mattagami. She is also a member of the Three Fires Midewiwin Lodge.

The Woman Award was presented to Vanessa Genier, Missanabie Cree, who is running for councillor in her community and previously started a project that became the non-profit organization Quilts for Survivors, which presents residential school survivors with quilts to honour their journey. She shares her love of quilting and her education in business with others through Quilts for Survivors.

The Emile Nakogee Award for Outstanding Leadership was presented to Cat Lake Chief Russell Wesley, who was recently elected for a second straight term and was previously chief from 2013-2015. He has focused on two main initiatives, mental health and addictions and natural resources, during his terms as chief, and during his 40-plus year career in senior management roles he was an active contributor to the development of intergovernmental and government policies at the federal and provincial levels including Indigenous Services Canada, First Nation and Indigenous Health Canada, the Ontario Ministries of Aboriginal Affairs and Natural Resources and Forestry and Northern Development.

The Youth Leadership/Community Involvement Award was presented to Jamal Gagnon, Taykwa Tagamou, a youth councillor who has worked to launch a Youth Council in his community and was able to raise $70,000 for a budget. He hopes the Youth Council will provide youth with a voice, input on community matters and inspire more youth participation.

The Youth Academic Award was presented to Logan Metatawabin, Kashechewan, who recently graduated from Kapuskasing District High School with four bursaries and plans to attend Cambrian College’s two-year Power
Engineering Technician program this fall. His goals are to work as a stationary engineer in nuclear energy.

The NAN Staff Award was presented to Stewart Kamenawatamin, Bearskin Lake, who was quick to throw in his hat to assist in the First Nation immunization project and works very hard to support his people. He is a dedicated family man who lives the Seven Grandfather Teachings in his everyday life and work.

The Youth Community Involvement Award was presented to the North Caribou Lake Youth Council for being active in their roles and vocal in advocating for the children and youth to bring programming and activities to their peers.
Their goal as a Youth Council is to bring healing in the areas of mental, emotional, physical and spiritual healing.