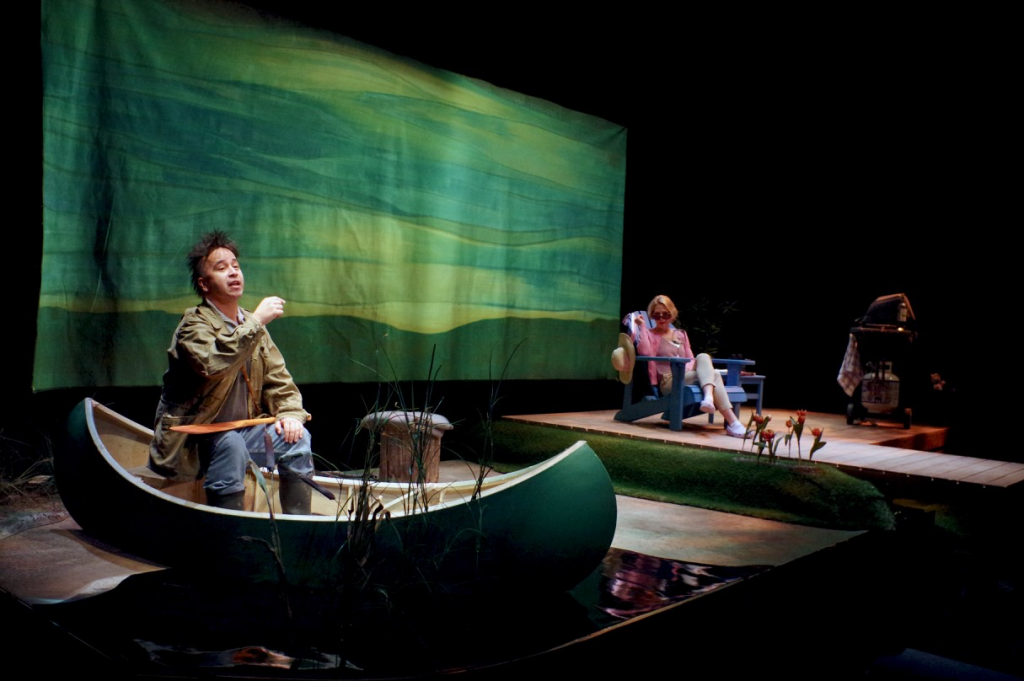 Herbie Barnes speaks about planting manomin in the lake while Philippa Domville looks on during the March 13 performance of Drew Hayden Taylor’s play Cottagers and Indians at Magnus Theatre in Thunder Bay. Photo by Rick Garrick.

Magnus Theatre’s production of Drew Hayden Taylor’s play Cottagers and Indians features the humorous dramatization of a bitter conflict between an Indigenous man who is planting manomin (wild rice) and a nearby cottager. Herbie Barnes, from Aundeck Omni Kaning, plays the Indigenous character of Arthur Copper while Philippa Domville, from Montreal, plays the cottager Maureen Poole in the one-act play, which runs from March 13-28 at the Thunder Bay theatre.

“I thought it was wonderful,” Taylor says after the first performance on March 13. “This is about the fourth or fifth envisioning of the script, and I think it is just absolutely wonderful. I’ve worked with Herbie on productions for 30 years and he just keeps on getting better and better.”

Barnes, who has appeared in Dance Me Outside, The Rez and Murdoch Mysteries and onstage at the Manitoba Theatre for Young People and the National Arts Centre, says Taylor is a “great writer who tells incredible stories.”

“They are tough because they’ve got meaning in behind them,” Barnes says. “And the comedy is a hard thing to play but it’s always great. I’m hoping (the play stimulates) conversation, always conversation, that it’s an honest and truthful conversation.”

Domville, who has appeared on the TV productions of Damnation and Murdoch Mysteries and onstage at the National Arts Centre, Stratford Festival and Shaw Festival, says the play is “amazing.”

“I’ve been really lucky to work with Herbie, who I’ve never worked with,” Domville says. “He’s very funny and a deep actor as well.”

Domville says her favourite part of the play is when her character is triggered and some of her “racism and her white privilege” are revealed.

“I love that and it always has to come from a truthful place out of passion and ultimately weirdly enough out of her love for the land,” Domville says. “The play is really a battle for land.”

Taylor drew inspiration for the play from the Kawartha Lakes region of southern Ontario where an Indigenous man, James Whetung, began planting and harvesting wild rice, much to the chagrin of the nearby cottagers.
Samantha Bird, from Thunder Bay, says the play was “great.”

“I just feel really inspired to plant manomin,” Bird says. “I enjoyed it.”

Lindy Kinoshamet, from Wiikwemkoong, says the play made him laugh.

“I always think about how other people think about the show so it was good to see all the non-Indigenous people in the audience watching it,” Kinoshamet says.

Christine Friday, from Temagami, says she enjoyed Barnes’ performance in the play.

“It actually reminds me of reclaiming our stories and our ways of living,” Friday says. “I think it’s a movement that is happening across the country.”

The play premiered at Tarragon Theatre in Toronto in early 2018 with Patti Shaughnessy as director. Future productions are scheduled for Ottawa and Saint John, NB.

“It’s a play about who owns the water and who has the right to water,” says Richard Rose, director of this production of the play. “So it’s a battle between a female cottager who has a cottage on this lake and an Indigenous person who is farming the lake with wild rice.”